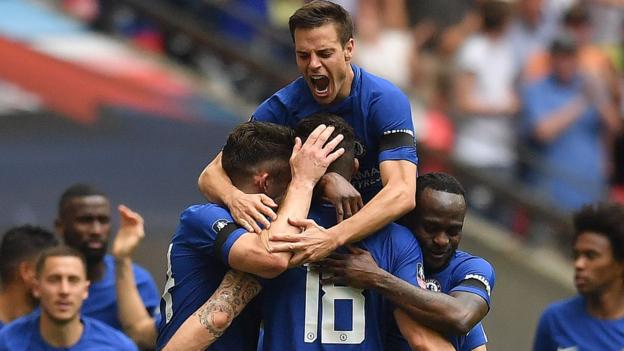 Chelsea striker Giroud received the ball from Eden Hazard and jinked his way past two Southampton players in a crowded area before he stabbed the ball home.

Giroud was replaced by Alvaro Morata with 10 minutes to go and the substitute sealed safe passage with Chelsea's second when he headed in at the back post from Cesar Azpilicueta's cross.

It means Chelsea manager Antonio Conte will come up against managerial adversary Jose Mourinho at Wembley on 19 May.

There is no love lost between Conte and former Chelsea manager Mourinho, who have traded insults throughout the season.

The final is also repeat of 2007 when Mourinho guided Chelsea to a 1-0 victory over United in the first to be played at the rebuilt Wembley.

2
Big Boy In Trouble As He Crashes G-Wagon He Rented To Impress A Girl (Video)
3
BBNaija 2020: I can't stay one week without you - Nengi tells Ozo
4
"Aboki I want to kiss you" - Lady holds aboki man on his shirt as she begs for kiss on the highway (Video)
5
"I hope he is not into drugs"- Fans express worry over new photo of phyno
6
BBNaija 2020: Neo's life is over after this place - Vee tells Laycon
7
EPL: Thiago Alcantara told he joined 'wrong team' after Liverpool move
8
BBNaija: You will know your relationship status after sex with Neo - Laycon advises Vee
9
BBNaija 2020: Why I want Laycon evicted - Neo
10
Alex Telles agrees deal with Man Utd

BBNaija: You will know your relationship status after sex with Neo - Laycon advises Vee

BBNaija 2020: I can't stay one week without you - Nengi tells Ozo

BBNaija 2020: Neo's life is over after this place - Vee tells Laycon

Osimhen speaks on facing Cristiano Ronaldo in Serie A

EPL: Why Mourinho will not play Gareth Bale until October