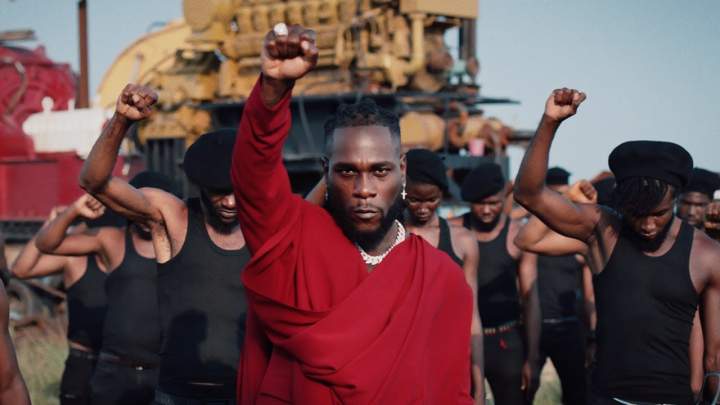 After the many accolades all around the world for the revered "Twice As Tall" Album, Grammy Award-nominated and one of Africa's leading light - Damini Ebunoluwa Ogudu, popularly known as Burna Boy wastes no time in dropping the visuals for "Monsters You Made", featuring Coldplay's Chris Martin, which is off that amazing body of work.

The very cinematic visuals perfectly portrays the message of the song, talking about the freedom of Africa and its colonisation by the western world.

Burna Boy is an epitome of "The African Message" and in "Monsters You Made"video, he clearly shows why he's the African Giant with a video like never before.

This one is for the history books! Oluwa Burna has done it again!

2
"I hope he is not into drugs"- Fans express worry over new photo of phyno
3
"Aboki I want to kiss you" - Lady holds aboki man on his shirt as she begs for kiss on the highway (Video)
4
Missing 16-year-old girl found in hotel with two boys in Imo state
5
Female SS3 students twerk away their sorrows as WAEC exams come to an end (Video)
6
BBNaija 2020: Erica joined me, Brighto in shower - Neo tells Laycon, others (Video)
7
BBNaija 2020: Why I want Laycon evicted - Neo
8
Drama as Kanye West urinates on Grammy Award (Video)
9
"Because you gave birth to me doesn't mean you shouldn't wash plate" - Little girl challenges her mother over house work (Video)
10
Man Utd vs Crystal Palace: Ighalo told to look elsewhere immediately