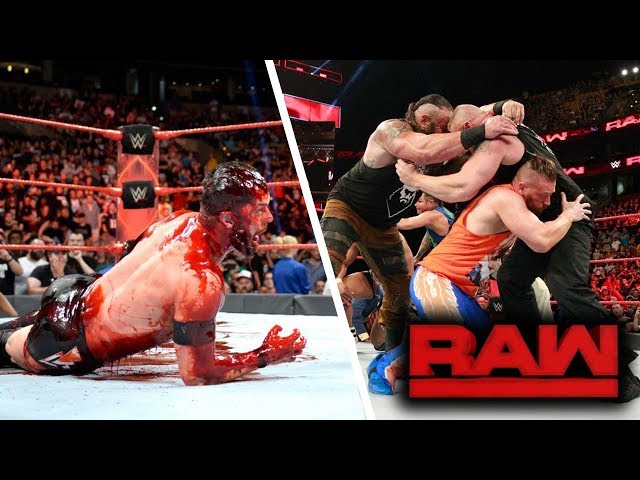 The show opened with a lengthy video package summing up Seth Rollins and Dean Ambrose's story to date, including Rollins turning down a reconciliatory fistbump from Ambrose last week. Then Ambrose hit the ring and demanded answers from Rollins. Rollins said he was done playing games, and extended his fist. Ambrose rebuked him, but eventually stuck his own fist out, which Rollins rebuked. The two then began brawling. They were interrupted by the team of Cesaro and Sheamus, who beat both of them up. Eventually, Ambrose and Rollins ran the tag champs off before finally joining fists, to the delight of the crowd. Raw GM Kurt Angle then came out and made a championship match between both teams at SummerSlam this Sunday.

1. No. 1 Contender's Match: Sasha Banks defeated Nia Jax. Alexa Bliss watched the match from a lifeguard's chair at ringside. Jax dominated Banks for a majority of the lengthy match, but Banks was able to make her tap out to the Banks Statement on its second application following an innovative reversal.

- Backstage, Angle was speaking with the Hardy Boyz when the Miz and the Miztourage interrupted, asking what he was going to do about Brock Lesnar attacking all of them last week. The Miz said he was going to fight Jason Jordan tonight, then all of the sudden, a referee appeared telling Angle there was a problem with Bray Wyatt and Finn Bálor, and the GM ran off.

- After the commercial break, Angle found Bálor and Wyatt fighting backstage, and told them they were going to have their SummerSlam match tonight.

- Elias was in the ring and sang a song about how terrible Boston is. He was interrupted by R-Truth, who was then beaten down. Elias then walked off with his guitar.

- Big Cass entered the ring standing in front of a shark cage and began recapping his feud with Enzo Amore and the Big Show, to incredibly loud boos. He was interrupted by Enzo Amore, who reminded Cass he had been knocked out by Big Show two weeks in a row, who then came out and got in Cass' face. Cass attacked Amore, Show attacked Cass, then Luke Gallows and Karl Anderson came down and beat up Show. Cass smashed Show's hand in the shark cage door.

2. Cruiserweight Championship Match: Akira Tozawa defeated Neville (c). Neville locked Tozawa in the Rings Of Saturn then had it reversed for a very close two-count. He then went up for the Red Arrow but missed when Tozawa moved. Tozawa then delivered a top rope senton bomb - his third of the match - for the victory. Titus O'Neil and Apollo Crews hit the ring to celebrate with Tozawa.

- Backstage, an injured Big Show told Enzo Amore he wasn't going to miss SummerSlam, regardless of his potentially broken hand.

- In the locker room, Emma told Mickie James she isn't getting the same opportunities as other women. James told her to put her phone down and face her in the ring later that night.

3. Bray Wyatt defeated Finn Bálor. Bálor went up to the top turnbuckle for a Coup De Grace, but Wyatt was able to knock him off and connect with Sister Abigail for the victory. After the match, Wyatt hit a second Sister Abigail then dumped a bucket of blood all over Bálor.

- Backstage, a blood-covered Finn Bálor left Kurt Angle's office and informed Charly Caruso that the two would have a rematch at SummerSlam this Sunday, and he will be reviving his Demon persona for the match.

5. Jason Jordan defeated the Miz. The Miz was accompanied by Maryse, Curtis Axel and Bo Dallas. Dallas and Axel interfered in the match when Jordan was about to hit his finishing move, giving him the DQ victory. Jordan was saved by the Hardy Boyz, which led to...

6. The Hardy Boyz and Jason Jordan defeated the Miz, Curtis Axel and Bo Dallas. Matt Hardy hit the Twist Of Fate on Bo Dallas, followed by Jeff Hardy connecting with the Swanton Bomb, for the win.

- Raw's main event was a confrontation between WWE Universal Champion Brock Lesnar and his three SummerSlam opponents: Roman Reigns, Samoa Joe, and Braun Strowman. Kurt Angle surrounded the ring with dozens of security guards before bringing each competitor out. Lesnar entered first, with Paul Heyman cutting a lengthy promo saying that either Lesnar will be the victim of a conspiracy to take his title away this Sunday, or Lesnar will beat his opponents and continue his reign as champion. Samoa Joe entered next and told Lesnar he does not fear him and that he will put him to sleep this Sunday. Next, Braun Strowman came out and told Lesnar he will be the last man standing. Joe reminded him that it was he put Roman Reigns down last week, not Strowman. Reigns entered last and immediately speared Joe before getting powerslammed by Strowman. Lesnar and Strowman were then separated by security before they could touch each other. Each man began beating down security guards and clearing the ring, leaving Kurt Angle to empty the Raw locker room to try and separate the two as the show went off the air.