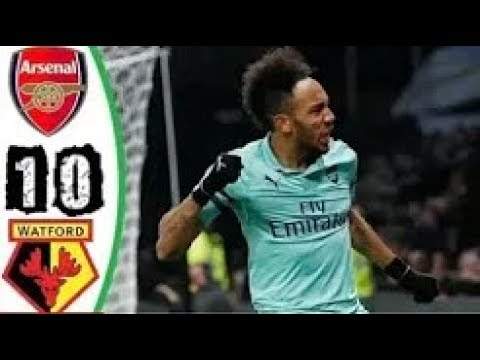 Pierre-Emerick Aubameyang's 18th Premier League goal of the season downed Watford and sent Arsenal up to fourth in the table.

Arsenal recorded their first away clean sheet in the Premier League this season with Ben Foster's mistake and Troy Deeney's red card contributing to a 1-0 victory for the Gunners at Watford.

Unai Emery's side have struggled for form on their travels in all competitions but were gifted three points at Vicarage Road on Monday, moving them up to fourth in the table.

Foster's lapse in concentration saw Pierre-Emerick Aubameyang score his 18th league goal of the campaign in farcical fashion in the 11th minute, with Deeney then almost immediately dismissed for an elbow on Lucas Torreira.

FA Cup finalists Watford impressed despite being reduced to 10 men, full-back Adam Masina clipping the crossbar with a superb drive in the second half, but they succumbed to their first home defeat of the year.