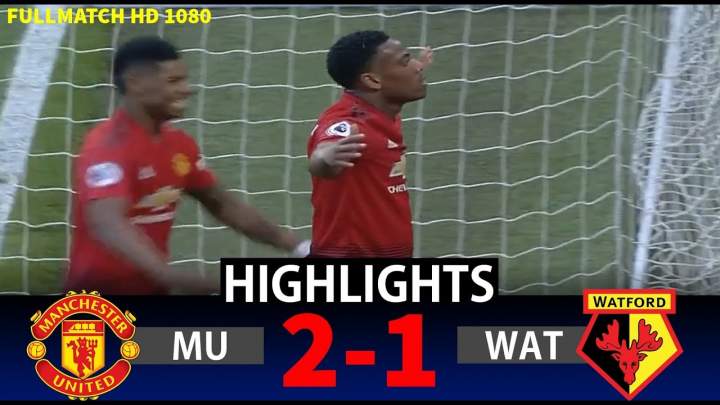 Manchester United have pushed back in to top four again after a 2-1 win against Watford in the Premier League.

It was a far from vintage performance from United who didn't start to click until 25 minutes had been played but it was Ole Gunnar Solskjaer's side who took the lead after a brilliant ball from Luke Shaw to play in Marcus Rashford who clipped a neat finish past Ben Foster in the Watford goal.

Watford started the second half on top and the visitors ended the game with 20 shots on goal compared to United's eight. But, United doubled their lead when Anthony Martial scrambled the ball over the line after Foster had spilt it.

Abdoulaye Doucoure pulled one back for the visitors in the 90th minute but United hung on for the first win of Solskjaer's permanent reign.

2
Cardi B explains why she filed for divorce from Offset
3
Nigerian lady set to tie the knot with man who borrowed her earpiece in 2016 (Photos/Video)
4
BBNaija 2020: Neo's life is over after this place - Vee tells Laycon
5
Gareth Bale's new shirt number at Tottenham confirmed
6
BBNaija 2020: I can't stay one week without you - Nengi tells Ozo
7
Big Boy In Trouble As He Crashes G-Wagon He Rented To Impress A Girl (Video)
8
Arsenal vs West Ham: Lyon give update on Aouar's move to the Gunners
9
EPL: Wolves coach reacts to Diogo Jota joining Liverpool
10
"Ladies should bill their fathers not their boyfriends" - Man says, using Otedola as example